‘Dedicated to spiritual ladies in general, and to all abbesses, prioresses, and nuns in particular.’ A pious female audience was the target group for the prestigious edition, in four volumes, of an illustrated saints’ calendar, Tägliche Erbauung eines wahren Christen, which saw the light in Augsburg between 1753 and 1755. This ‘Daily Edification of a True Christian’ was an instant success: a second edition was put out in 1762/63. For every day there was an engraving of the day’s saint provided with a ‘synopsis’ in Latin, and followed by a short life, a meditation, and a prayer in German. In volume 3, July-September, on the 23rd of August, the pious ladies were meant to be edified by Sidonius Apollinaris. Here is his portrait: 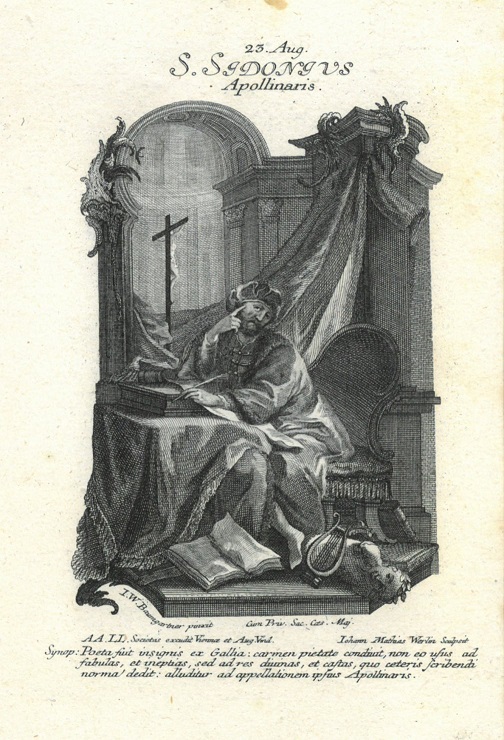 Sidonius is depicted as a poet-bishop at his desk in front of a cross; next to him on the floor are a lyre and an overturned bust of Apollo (?) with a laurel wreath. The synopsis underneath runs:

‘He was a famous poet from Gaul, who seasoned his verse with piety, not using it for idle tales, but for divine and chaste purposes, providing others with a standard in writing. This is an allusion to his surname Apollinaris.’

The biographical note goes on to specify Sidonius’ merits as a panegyrist, while the ensuing description of his lavish care of the poor and the smear campaign against him by two of his priests is essentially a free adaptation of Gregory of Tours’ account (Hist. Franc. 2.22-23) [1]. In the meditative section, the stress is on the humility of the saint who exemplarily waived his worldly success as an orator. The author then goes on: ‘And you, dear Christian, do you also leave the world’s vanities behind out of love for God?’

Well, the pious ladies no doubt got enough material for self-reflection (who wouldn’t?), but note that the edifying part in German does not match the Latin synopsis, which is only about poetry and about Sidonius applying it ‘for divine and chaste purposes’. The ladies might indeed have wondered why Sidonius (who?) figured in their book at all, along with other little known, foreign saints. It would have been more logical if a local saint had been picked for their devotion than an unknown ‘French’ one.

Mascolo’s Encomia coelituum
As a matter of fact, the publisher, in his foreword, had drawn the reader’s attention to the fact that the Latin original was also in the house’s catalogue: Encomia coelituum, by the Napolitan Jesuit Giovanni Battista Mascolo. And in the foreword to that publication, he had pointed out Mascolo’s idiosyncratic selection of saints, aiming at ‘τὸ θαυμαστόν et inaspectatas sententias’ (‘the marvellous and unexpected observations’). The layout of the items in this calendar is, however, different: the portrait (the publisher’s unique selling point) and the synopsis are the same, but they are followed by a one-page ‘Encomium’. Both the synopsis and the encomium come directly from Mascolo’s work. But that takes us more than a century back.

In 1638, Mascolo (1582-1656) published Encomia coelituum (‘Eulogies of the Saints’) with the intention of comparing the glorious deeds of the Christian saints to the superseded exploits of the Ancients. Each month is provided with an introduction in which Mascolo explains why he picked the saint for each day, preferring stories that were revealing to those that were conventional. Each saint then receives a ‘Synopsis’ and an ‘Encomion’, one page in all.

We have seen that the synopsis for Sidonius stresses the divine and the chaste in his poetry. The ‘encomion’ praises him for being both a lyrical poet and a prefect of Gaul [sic], which is reflected in his name: a Sidone accepit purpuram, ab Apolline lauream (‘from Sidon he got the purple, from Apollo the laurel’, p. 378). Of course his inspiration was non Venus, sed virtus (‘not Venus, but virtue’). The introduction to the month (p. 346) explains that, from amongst other laureati, Sidonius is selected because he truly chastened the laurel (qui laurum ex incesta, vere fecit innubam, ‘he made the laurel truly virginal, from being unchaste’) [2].

Chaste poetry, that is the catchword. It finally takes us to the reason why Mascolo chose Sidonius. One of his pivotal works is the Lyricorum sive Odarum libri XVI from 1625, Christian odes in the style of Horace. Mascolo dedicates the work to casto lyricorum poetarum choro (‘the chaste choir of lyrical poets’). For him, Horace’s genius, rid of Venus and replete with virtue, is the supreme weapon to defend Catholicism against Protestantism. Horace is his instrument of Counter-Reformation [3], and Sidonius … is Mascolo himself (though, judging by the text, one might wonder if the Jesuit ever really read the Saint).

Baumgartner’s oil sketches
Back to the Sidonius engraving and the Tägliche Erbauung project. Augsburg boasted a huge production of similar calendar sets of saints and other devotional prints [4]. In the production process, engravers were employed to cut the plates that were used for printing the illustrations. They worked on the basis of artists’ designs. The Sidonius portrait was designed by Johann Wolfgang Baumgartner (1702-1761). In 2009, the former Salzburger Barockmuseum devoted an exposition to this Augsburg rococo painter [5]. Baumgartner was one of the best artists around in Augsburg and the most prominent designer in the Tägliche Erbauung project, contributing up to 280 portraits of saints for as many days. What is special about these portraits is that he executed them carefully in colour oil paint instead of the usual throw-away grisaille, which makes the ca. fifty surviving pieces an important testimony of rococo art. Here, to conclude, is one of these, more or less similar to the Sidonius portrait: St Leopold (15 November) [6]. 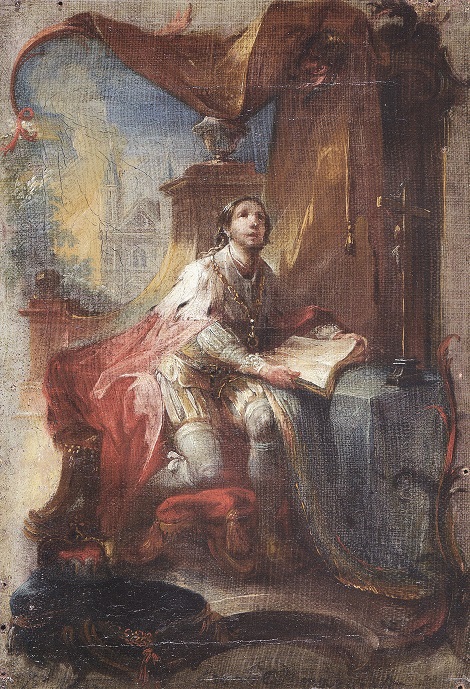